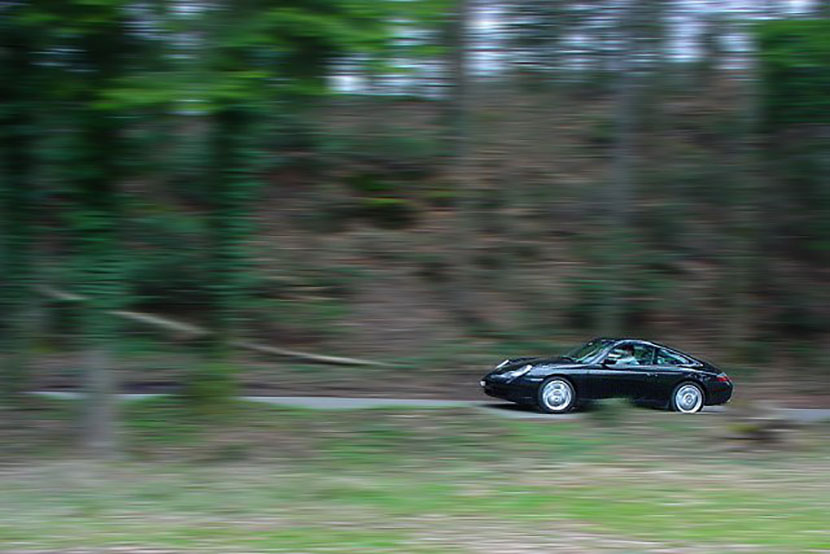 Porsche Nine-eleven, magic words to car enthusiasts. From the very first models of the swinging sixties to the 993 model of the late 90’s, this legendary car evolved through time without ever having a major overhaul. Proving that a car can stay at the pinnacle of automotive engineering through gentle evolution. To some people, 911s are just expensive over-engined beetles. But those people have probably never sat as a passenger in the car let alone driven one. Any pre-996 Porsche will get your juices flowing as soon as you set off. They are tactile treats; all your senses are stimulated when you drive one. Perfect steering, perfect brakes, perfect build and last but not least, perfect soundtrack. Hearing that howl under full acceleration is in itself enough to make you fall in love. Thanks to the above and its rear engine configuration the old 911’s exciting to drive even at reasonable speeds. But all legends have to be laid to rest. It’s successor, the 911 model 996 introduced in 1997 has had so many changes compared to its direct predecessor that it can confidently be called a brand new car.

Because of restrictive noise and emissions regulations, Porsche has been forced to switch to a water-cooled engine. Still a flat six, but with it’s capacity reduced to 3.4 liters instead of the 3.6 in the 993. The chassis and styling are new too, making it lighter, more aerodynamic, more comfortable and more spacious than before. Even it’s handling is tamer than ever. Has all this made it even more exhilarating or has it, like many modern cars, become too boring for it’s own good?

Our test car, a Carrera 4 Tiptronic, introduced in 1998 has more electronic gizmos than a Cray supercomputer, its spec list reading like a corporate list of acronyms, notably PSM (Porsche Stability Management). PSM brakes individual wheels to quell over- or understeer. If that isn’t enough, PSM also uses the engine management system to bring the car back under control. You can deactivate PSM, but it always stays active under braking. Apart from PSM, it also has ABS which we all know about, E-Gas which is a drive by wire throttle, ASR traction control and ABD automatic brake differential which modulates the amount of torque between the rear wheels to aid braking stability. The four-wheel drive system uses a viscous coupling to vary front wheel torque from 5 to 40 percent. Will we find our old friend under all this techno gadgetry?

What strikes you at first with the styling is how much the car resembles it’s less expensive sibling the Boxster, the whole front section, apart from the bumper is the same, making it difficult when driving in front to distinguish what kind of Porsche is filling your rear view mirror. Things get better at the rear, where the roofline and rear window distinguish this car as a true 911. Albeit an oversized one, at 4m43, the 996 is a full 17 cm longer than its older brother. But forgetting it’s size and resemblance to the Boxster, the exterior styling is quite effective, making this a truly modern and sleeker iteration of the classic 911 shape.

It’s when you open the door that old 911 fans may be saddened. Gone is the snug feel of the cabin, the no frills dashboard and upright windscreen that made the 911 feel like a modern classic. It has also lost that metallic clunk when you close the doors, which made the car feel as if it was hewn from a solid block of metal. All this is replaced by a much more modern interior design, nearly identical to the Boxster’s, an over styled version of the old interior. It isn’t unpleasing and the fit and finish is excellent, but its ‘feel’ has changed, something that you can’t explain through mere numbers makes this car radically different. Some of the details are a letdown. The metallic effect plastics on the center console spring to mind, as do the over-designed and incomprehensible controls of the ICE (In Car Entertainment). But the worst thing of this interior is truly the column stalks that have such a plastic feel that they would be a disgrace in most medium priced saloons, let alone in such an expensive sports car.

But interiors aren’t what ‘RealDriver’ is all about, right? So off we go to do some ‘Real’ testing.

From the driver’s seat, there isn’t much to write home about, as everything falls into place pretty well, the seats hold you firmly, while not being uncomfortable, you aren’t sitting racecar low, but you don’t feel too high perched either. Turning the key, which is still traditionally placed on your left, the engine erupts into an unmistakable – if quieter – flat six drone. But you can tell that it isn’t the same engine, gone are the old ‘woofle’ and vibrations of the air cooled six which reminded you of a cross between a beetle and a Le Mans racer, this one sounds more synthetic. Still nice and melodious, but for some reason, doesn’t get your spinal hair tingling just as much. Putting the lever into ‘Drive’ and pressing the now top hinged gas pedal, we move off.

The TipTronic auto box halts any enthusiasm when you accelerate on full throttle, even though you can set it to manual and change the gears using small buttons on the steering wheel, when you near maximum revs, the electronic brain decides to change up with that characteristic slurring noise and delay that reminds me of the horrible banana yellow Mercedes in which I used to be carried around in as a child in the late 70’s (objectively, it is as good and as fast as any modern auto, but budding Schumachers will be disappointed, they won’t get the enhanced driving experience that Ferrari’s sequential box offers). All this, together with the humdrum interior leaves a bitter taste in my mouth. What have they done with one of my all time favorites?

Time to take our steed to some twisties, and finally the Porsche delivers some of the qualities that made the 911 such a myth. Equipped with the optional sports suspension and 18 Inch wheels, this car really flies. The steering is as always nicely weighted with lots of feel, the car responding with millimetric precision to all your inputs without rolling as soon as the G-forces start climbing. Turn-in is sharp, with some understeer as before, but balance is very good and backing off the throttle never induces the snap oversteer that used to be a 911 trademark. This is replaced with a nice degree of right foot adjustability. On exit the 3.4 liter flat six’s power punches the car to the next turn. Extremely satisfying, extremely 911 like, only sharper and faster… Even with PSM switched back on, the throttle still controls the cars attitude, electronic wizardry only stepping in when necessary. The only drawback, apart from the auto box, comes from the fact that the car is rather bigger than 911s of old, minimizing the pleasure that the 996s extra precision brings to the equation. What you aren’t really aware of anymore is that the engine is at the rear. You can feel the weight when pressing on, but it never makes you weary that the rear end may overtake the front and the bonnet never bobs up and down as with older 911s, this is partly due to 4-wheel drive and the extra weight the system puts over the front end.

Settling down into a calmer mode, Grand Touring style, the car flows from bend to bend, perfectly planted, while still retaining the immediacy of a true sports car. The 4-wheel drive system giving the C4 extra stability over its 2-wheel drive stable mate. Even with it’s sports suspension, it remains comfortable enough for touring (that’s a Real Driver assessment of course), being unsettled only on rougher roads, showing that the car has retained and even surpassed by a noticeable margin the all rounder capabilities of the 911 to the point that in normal driving circumstances, the experience is more Golf than 917. Noticeable flaws being relatively high motorway tire roar, but as mentioned before, our car was equipped with optional 18 Inch wheels. Slightly smaller wheels (as on the photos) are a better bet, as they allow an extra dose of slip when driving fast, as well as reducing the tramlining and tire roar of the bigger wheels.

Climbing out of the car before giving it back, feelings are mixed. Not about the tiptronic box, auto boxes have their place in saloons, but not in a car like the 911 that can switch from being a good GT to an outright sports car. No, it’s because, while undeniably better dynamically, the 911 has lost some of its heritage and character in order to appeal to a wider and softer market. I suppose it’s all about evolution but in the end even if it is better, the car does feel less special than before.

Don’t get me wrong, dynamically, the 996 is quantifiably better than the 993, it is also posh enough to stand it’s rank with the stuffy nosed crowd, practical enough to do your grocery shopping, reliable enough to keep you from becoming a close acquaintance of your dealer. Its main flaw is that it doesn’t give as many thrills as before.

Like one of those sixties cult TV shows that Hollywood majors try to polish for the big screen to appeal to a wider audience, the 911 has had some its purity diluted in it’s modernization process. 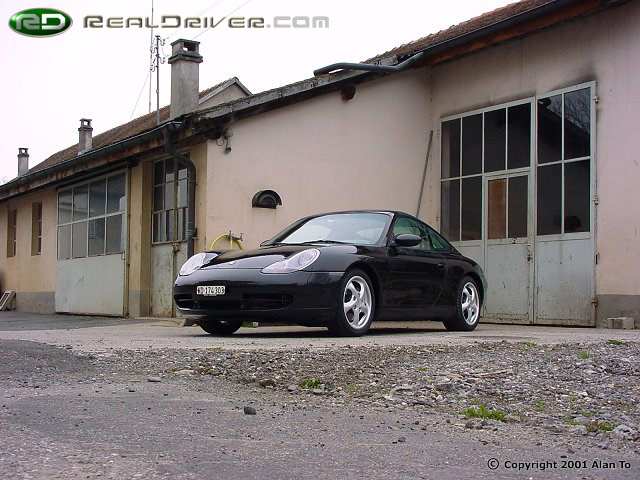 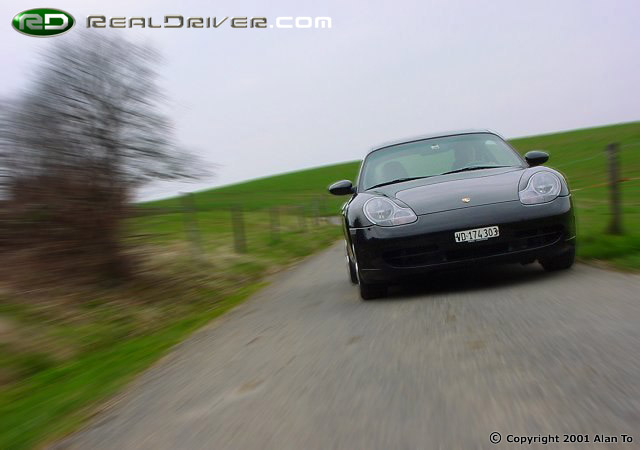 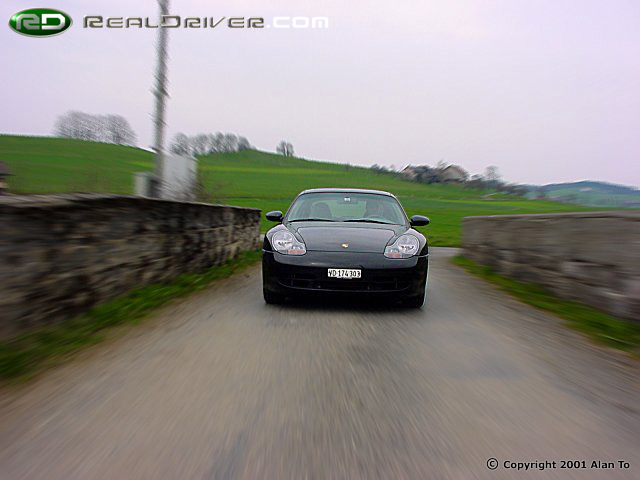 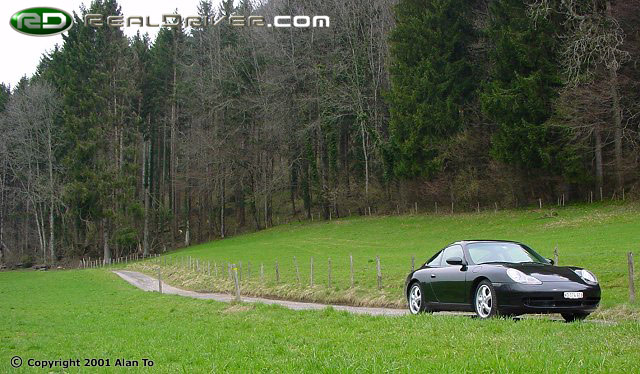 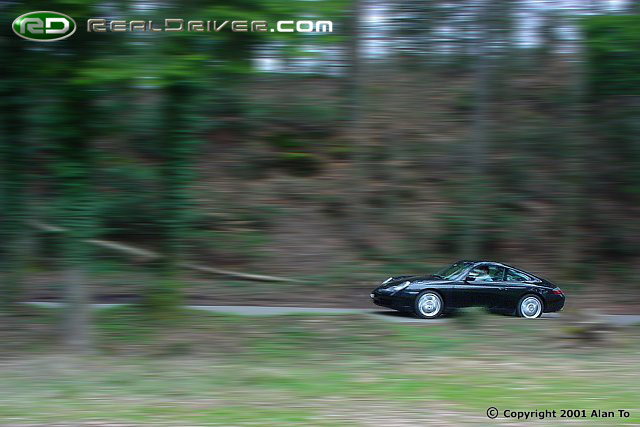 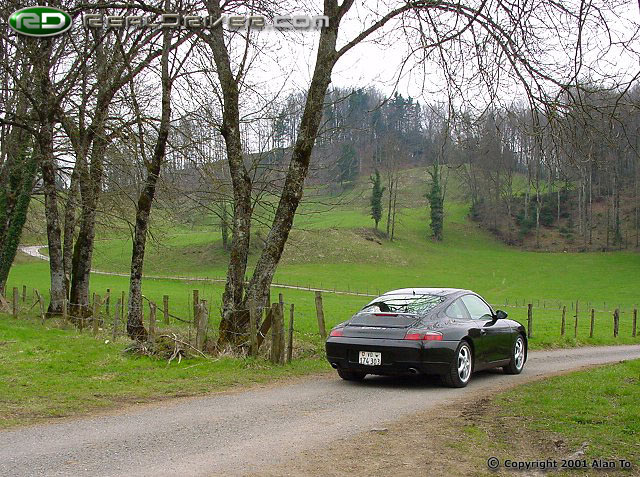