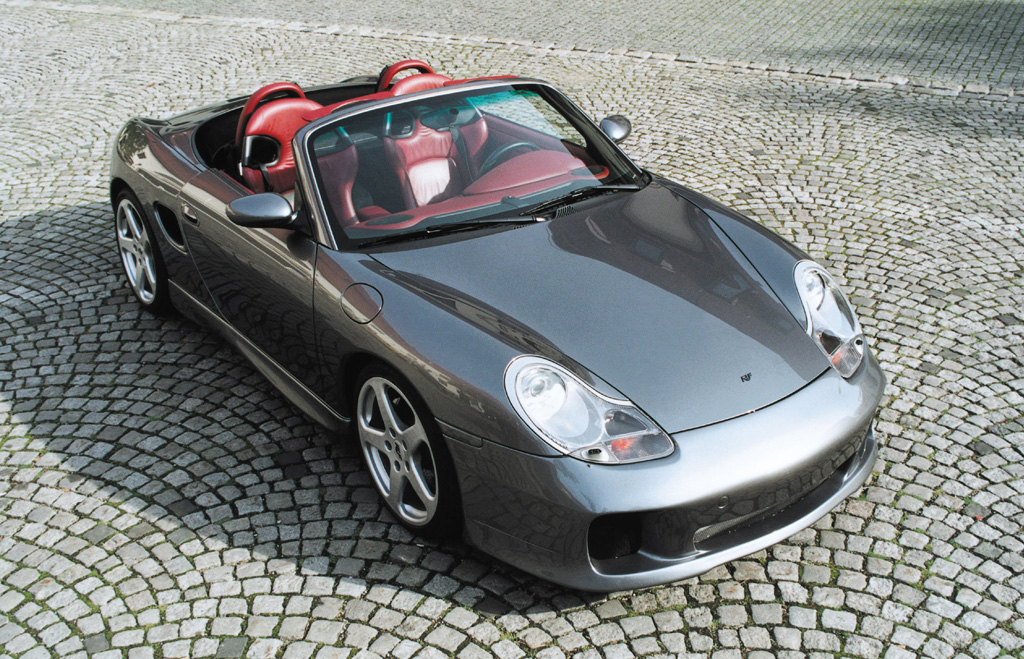 Are you a poser or a purist? Be honest. Provided you don’t crash into a parked car while checking yourself out in a store window, there’s nothing wrong with buying a sports car to flatter your ego. But if you’re more concerned about public perception than performance, the RUF 3400S is not for you. It’s a Porsche Boxster. Yes, RUF have modified this particular version to blast from zero to sixty in well under six seconds and out-corner a Ferrari, but it’s still what the British call a “hairdresser’s car”. Compared to the fearsome 911, the street cred will never, ever be there.

Ah, but if you are a purist, get ready for a treat. You’ll already know the Boxster has one-up on its 911 stable mate: a mid-engine layout. (For the blissfully ignorant, the 911’s engine sits behind the rear wheels. It must use clever tricks to overcome the engine’s basic desire to overtake the front end during heavy cornering.) But what purists can’t know- at least until they drive the 3400S- is the Boxster’s true magnificence.

Why? Because the supremely capable official Porsche product doesn’t have enough power to fully exploit the Boxster’s dynamic capabilities. In other words, the Boxster is too slow.

It’s true. Even the latest 3.2 litre Boxster S engine isn’t powerful enough to completely liberate the car’s basic talents. Porsche must figure that the 911 must be faster than the “entry level” Boxster to justify the huge price difference. Luckily, Alois Ruf and his expert team of German super-tuners don’t work for Porsche. So Ruf felt free to even the score, by shoehorning a water-cooled 3.4 litre 911 engine into the Boxster. The resulting machine is the most exciting car Porsche has never made.

You wouldn’t know it by looking at it. Approaching the 3400S, you’re confronted by a turbo-look nose that seems designed to vacuum-up slow moving traffic. It’s about as appropriate to the delicately proportioned Boxster as boxing gloves on a ballerina. Inside the cabin, RUF continues the visual aggression with race-ready GT3 seats. The bat-eared chairs dwarf the cockpit and evoke a John McInroevian response: you cannot be serious! Thankfully, the rest of the car is standard-issue Boxster, with tasteful RUF badging in the usual Porsche places.

Fire-up the 3400S and the sports seats suddenly seem less ridiculous. RUF’s reworked exhaust resurrects the raspy, aggressive bark cherished by devotees of the air-cooled 911. The sound is both nostalgic and addictive. It’s a little strange to be blipping the drive-by-wire throttle of a Boxster- a car continually criticised for not being “a real Porsche”- hearing noises that make standard Carreras sound like automotive castrati.

Snick the Boxster’s six-speed into first, press the loud pedal, release the clutch and things get even stranger. The 3400S rockets forward with unrestrained zeal. When the 310hp engine hits its sweet spot, at around 3500rpms, it pulls with supercar ferocity. At that point, you’d be forgiven for thinking that Corvette had a hand in this somewhere.

The surround-sound wail hardens, and the thing just gets up and goes. Trucks lumbering down Germany’s billiard table roads are reeled-in like dynamite stunned marlin.

The numbers tell the tale. Zero to sixty requires 5 seconds. The sprint from rest to 100 mph takes 12.2 seconds. Compared to the Boxster S (itself no slouch), the 3400S is almost a full second faster to sixty, and 2.2 seconds quicker to the ton. The RUF car finally runs out of steam at an astounding 173mph.

In fact, the RUF 3400S and the Porsche 911 Carrera Cabriolet offer virtually identical performance. What sets the two cars apart is the way the RUF car delivers that performance. On a winding road, at any speed, the 3400S is spirited, involving and technically flawless. Unlike the 911, its talents are always entertaining, accessible and benign (unless you are determined to die). Brake in a corner and… go round. Hit a big bump mid-corner and… go round. The RUF Boxster changes direction as effortlessly as a wind vane, yet cruises without the slightest stress. In short, it serves up lashings of that old-fashioned sports car virtue known as “fun”. And it’s all yours for around £55,000 (price in 2001).

Wait a second. That means RUF’s modified Boxster costs roughly 7 grand less than a new Porsche C2 Cab! Add a bit of specification to the 3400S (a more suitable GT3 front end and 19″ wheels are a logical starting point), and the price difference soon disappears. Who in their right mind would pay Carrera money for a Boxster?

Again, a purist. The 3400S’ power and melodious exhaust create what the Boxster promised from the start: the pure, undiluted, roadster experience. RUF’s Bad Boy Boxster is more fun at slower speed than a standard Carrera, and almost as accomplished at higher ones. The 3400S drives with all the eagerness and verve the 911 lost in Porsche’s quest to make the “tricky” 911 both faster and safer.

In the final analysis, the 3400S only surrenders two things to the basic 911: back seats and street cred. The former isn’t an enormous issue with most Porsche buyers. The latter is, let’s face it, insurmountable. No matter what body kit you graft onto the Boxster, no matter how fast or agile the car becomes, it will never have the 911’s macho appeal. So, Porsche fans, it’s make up your mind time. Are you a driver or a poser? Answers in an envelope to Alois Ruf at the address below. 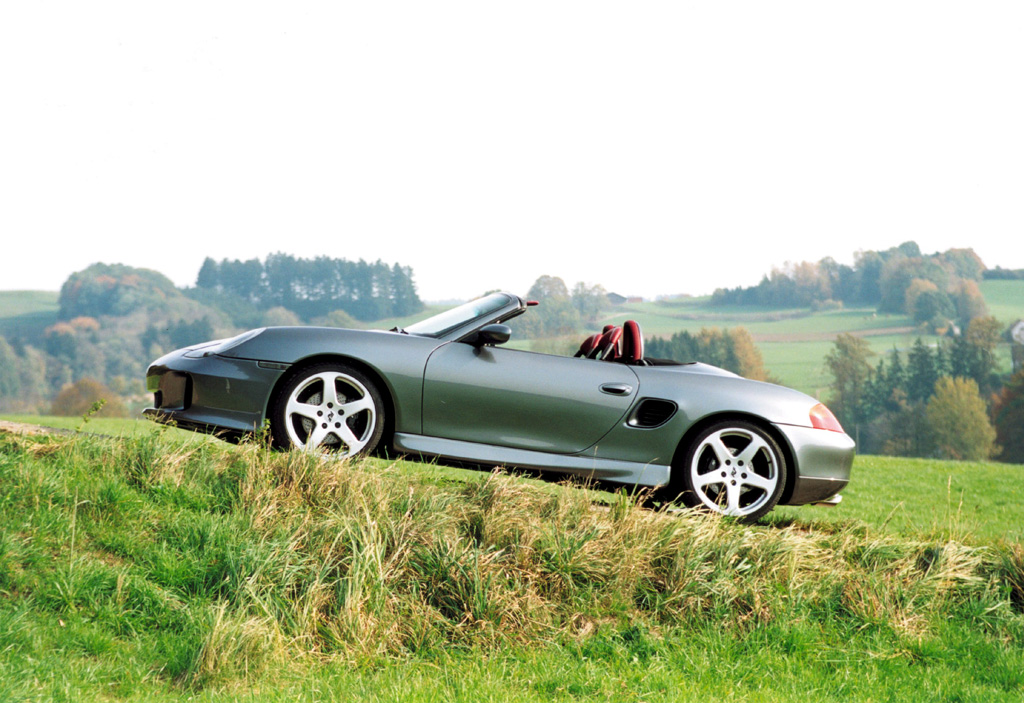 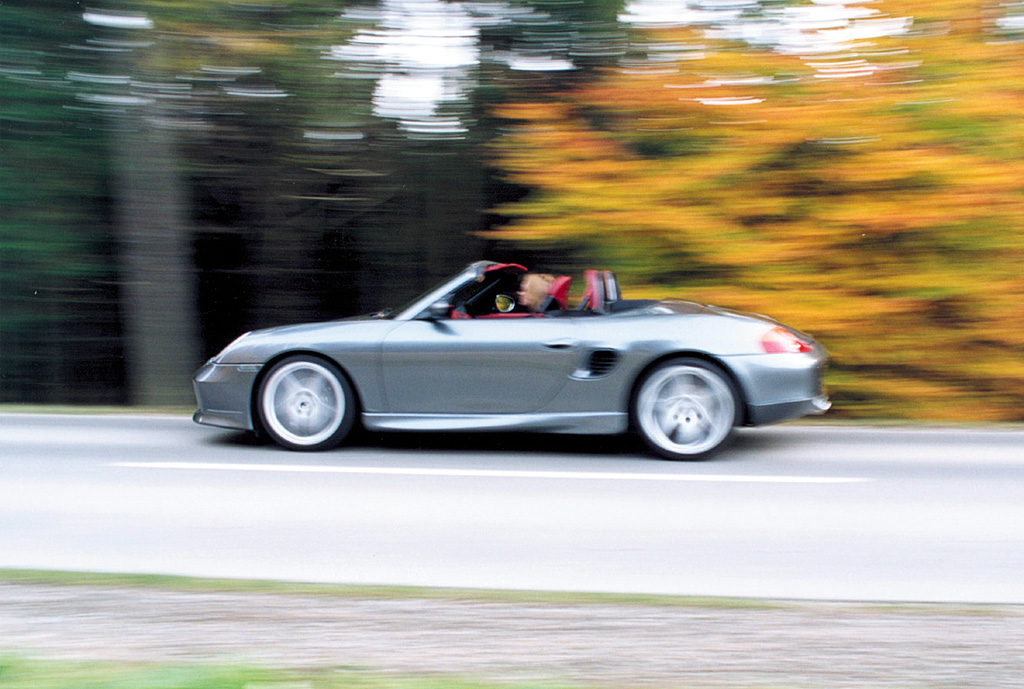 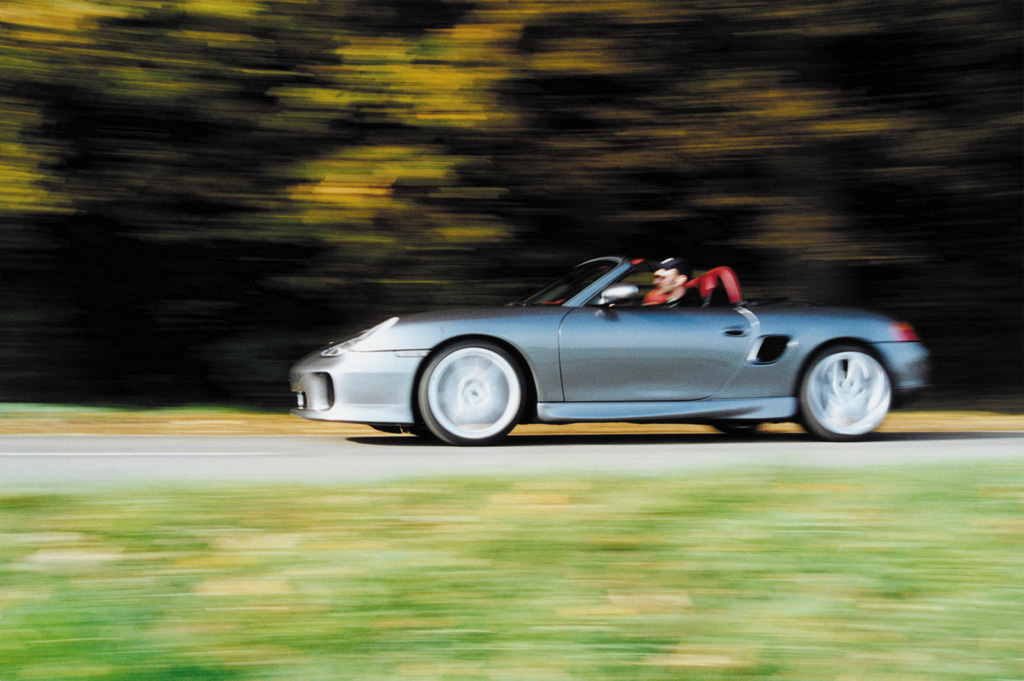 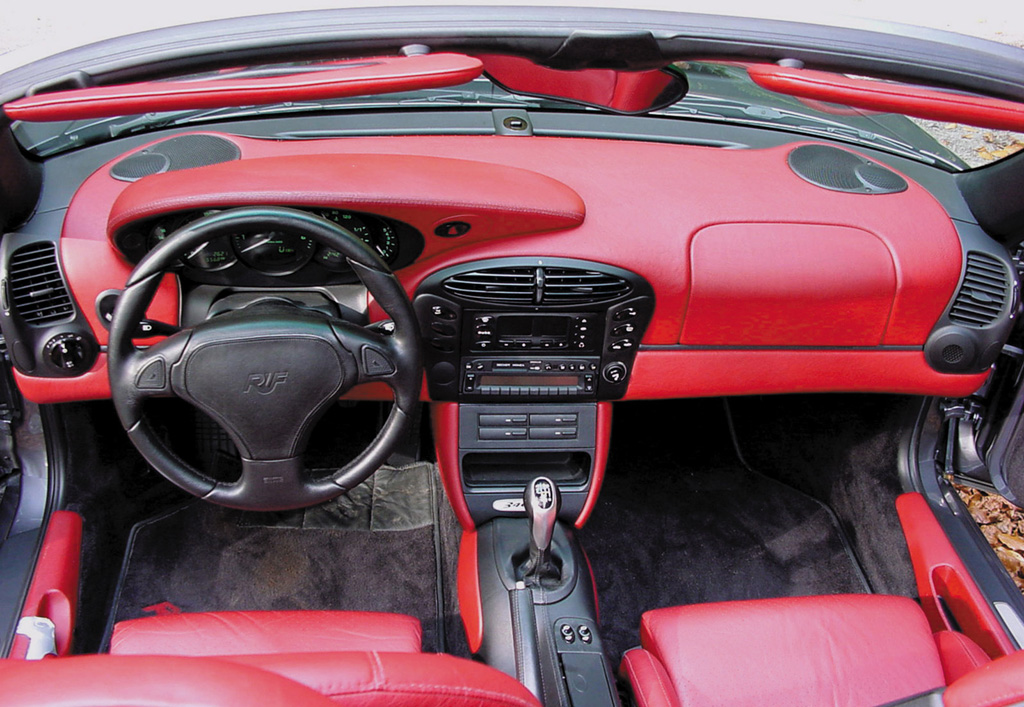 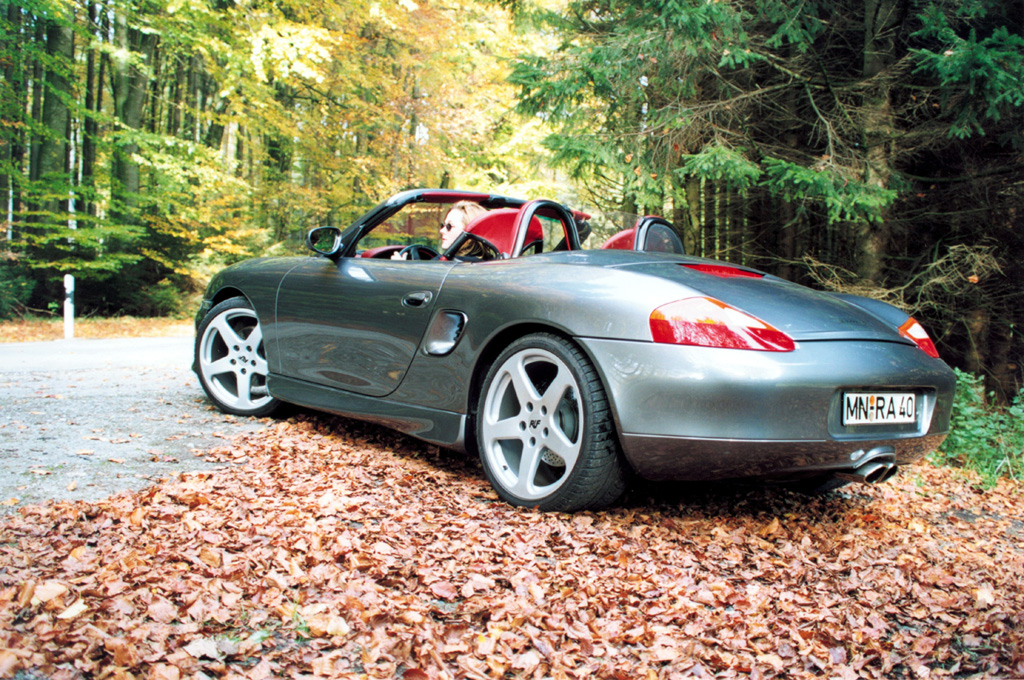 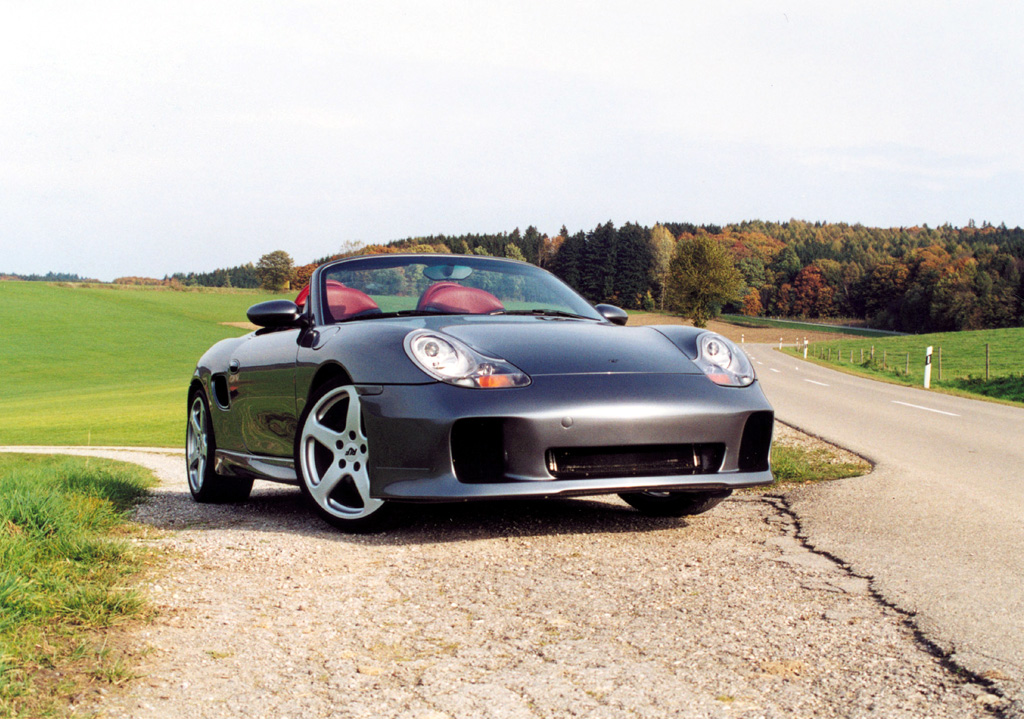